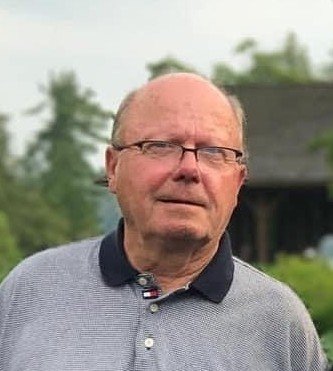 Please share a memory of James to include in a keepsake book for family and friends.
View Tribute Book

Hollingshead, James Douglas (Jim):  Jim Hollingshead, 74, passed away on June 8, 2021 after a short, but courageous battle with esophageal cancer, under the compassionate care of the Palliative department of the Port Colborne Complex Care Site. He leaves behind his loving wife and best friend of 52 years, Jean Hollingshead (Donovan). Jim was the proud dad of daughter Lori Guillemette (Paul) and son Mathew Hollingshead (Line). One of Jim's proudest roles was that of Poppa to grandchildren Bradley Guillemette (Kelsey) and Emily Walsh (Marc-Antoine). He was thrilled to learn that his new great grandson, Jackson James Walsh would be named after him. Cherished dog Chloe will miss their long walks together and cuddles on the recliner. Jim was predeceased by loving parents Art and Thelma and sister Carol and will be lovingly remembered by brother Robert Hollingshead (Anne), and his Donovan Family. Jim had a special bond with many of his nieces and nephews. Jim developed a love of curling at a young age. His man cave was filled old crests and photos from his glory years. After retiring from Frito Lay he played golf every chance he got. Jim was also an avid fan of NASCAR, crossword puzzles and was a Words With Friends aficionado. Cremation has taken place.  If desired, memorial donations to Port Colborne Complex Care can be made through the funeral home, merritt-fh.com or (905)957-7031.

Share Your Memory of
James
Upload Your Memory View All Memories
Be the first to upload a memory!
Share A Memory