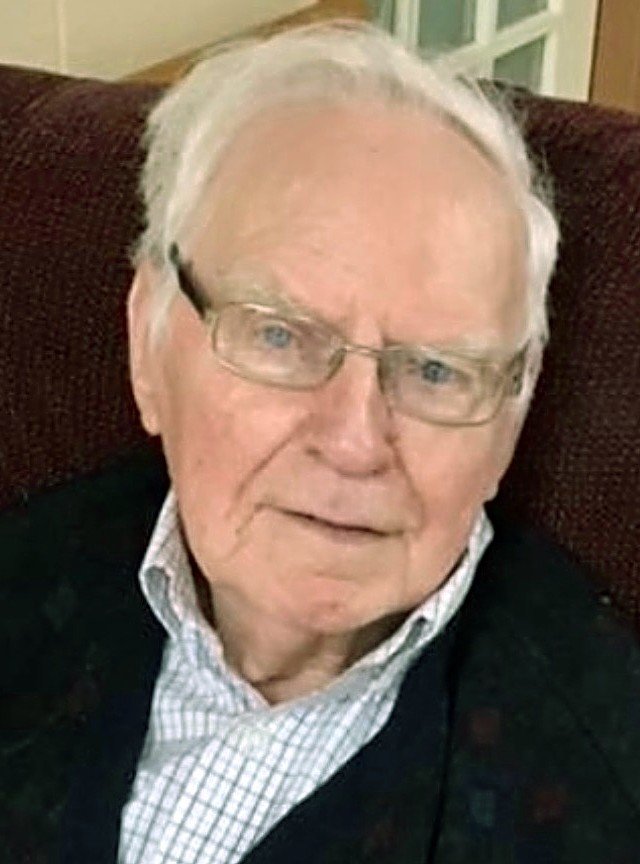 Will always remember how much Fred liked to come to my shop and spend time working on lawnmowers . I enjoyed our conversations during our work and over a cup of tea. I was only able to visit him a few times at Shalom, before the COVID shutdown.

Despite Fred's advanced age it still came as a painful shock to learn of his passing. Our association has a lengthy history going back to the late 1970's when we both worked at the Hamilton Health Unit. Being a complete outsider when I started there and not knowing anyone, Fred was quick to extend the hand of friendship particularly when he learned I had a Dutch wife which seemed to establish an immediate connection.

My tenure at the Health Unit was short but our friendship was not and endured for another 40 years until the time of his death. Fred was a man of unusual qualities but the one that endured me most to him was his sharp wit and sly sense of humor. There was never a time when we got together that we wouldn't joke and laugh over some distant humorous episode. There are many stories I could relate but in the interest of brevity I will limit it to just a couple.

(1) THE TORTUISE AND THE HARE: During my time with the Health Unit both Doug Hart and myself car pooled with Fred. Fred, as those who knew him, was a very punctual person not blessed with excessive patience. On the way to the office Fred would drop off Doug Hart at the Health Lab and carry on to work. One morning during the drop off there was a lot of traffic and Doug, as his manner was, tended to be a bit slow getting out of the car. Fred, fervently looking into his rear view mirror at the traffic build up and anxiously looking at Doug, suddenly stepped on the gas with Doug barely out of the door and Doug looking like a deer in the head lights, watched Fred's car take off down the road. Doug was not hurt but in the ensuing years whenever he asked me about Doug I would joking tell him that he was still in a body cast.

(2) BILL, YOU LIVE IN A BARN: One of my early building projects in the 1980's was to dismantle an old timber frame house and erect it alongside my existing house. Both Norman and Fred helped me from time to time with this. Once the project was complete Fred dropped by to inspect my work. He came in through the door, took a few seconds to have a good look and in his characteristically frank manner said, "Bill you live in a barn". It still makes me laugh even after all these years when I think about that moment.

In the years after Fred moved into Shalom we would meet at least weekly for coffee and conversation.

Invariably after a short time Fred's conversation would turn to his family who he dearly loved and was so proud of. He never failed to tell me how well Patti looked after him and how lucky he was that she lived close by. I truly enjoyed those visits and his company but in short order they became the first casualties of the Pandemic once Shalom went into lock down. Fortunately I had one final visit the day before the door to visitors was closed, but regretably it would be our last contact before Fred's death.

In circumstances such as this I am reminded of the words of Shakespeare who poetically wrote, "PARTING IS SUCH SWEET SORROW". A sentiment I clearly share in regards to the loss of my dear old friend, Freddie Leenstra.

Our deepest condolences Marg & Ken, Yvonne & Rich, Patty & Sid and Norm & Lisa and to the extended family on the passing of your father, grandfather & great-grandfather. May you all find comfort in the knowledge that he is indeed now with his Lord and Saviour.

Leenstra family. Condolences to you with the recent passing of your dad. I so enjoyed many conversations with your dad. He loved to chat about what we would call " the good old days"!

Dear Leenstra family, we offer our sincere condolences with the passing of Fred Leenstra. It was a pleasure to meet him when we met with him in Smithville when that occurred sporadically. We wish you God's blessing while you deal with his death, knowing he is in a better place.

My condolences to Fred's family.

I had the privilege of working with Fred at City of Hamilton Public Health. He was highly respected and a very nice man. It was so nice seeing him over the years after he retired as he'd attend other work related retirements, parties and other events. I especially liked the twinkle in his eye.

Marg, Yvonne, Patty, Norm and families our deepest condolences with your dad's passing. Our thoughts and prayers are with you all. Faith is our comfort as we grieve. May your faith in Christ's promises bring you all peace at this time.

Dear family, our thoughts and prayers are with you today. We will be watching the funeral service and will be with you in our hearts. Would love to give you each a big hug, and let you know that you are loved and thought of today. We loved Uncle Fred! He always had a good story to share and a warm hug and kiss for us. God be with you as you remember and celebrate your Dad today. God be with you!

Marg, Yvonne, Patty and Norm and families...my deepest condolences with your dad's passing. My thoughts and prayers are with you.

So sorry on the passing of Fred. He was a good & loyal friend one of the best.

I have known him for over 60 years through work & retirement lots of memories too many to start listing. A great many have come to mind over the last few hours.

We are so sorry for your loss and feel so bad we can’t be together to grief and support each other during this difficult time. We will be watching the service and be with you in spirit. Sending you all a big hug and may God comfort and uphold you now and always.

Sending our condolences on your loss. We Remember him well! Sending prayers. Ed & Trish Bos