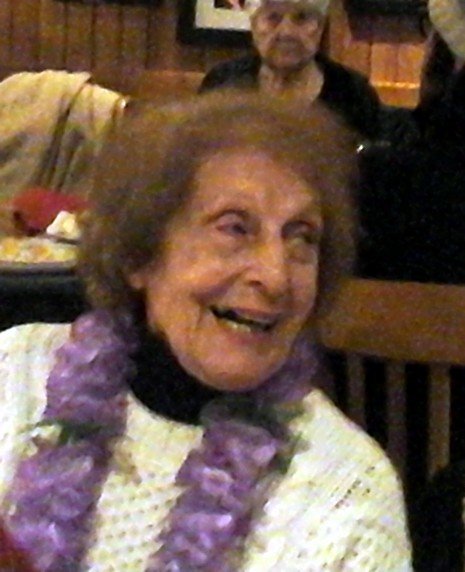 Please share a memory of Alice to include in a keepsake book for family and friends.
View Tribute Book

It is with profound sadness that we announce the passing of Alice in her 104th year.  She passed away peacefully at Kilean Lodge in Grimsby, with nephew Harry Mooradian (Emellyn) at her side.  Predeceased by her husband Norman of 62 years, brother Robert (Bob) Melkom, sisters Sadie and Doris Mooradian, nieces Lillian and Beatrice, nephews Jackie (Sophie), Billy, Dave (Mary), and Sydney (Clara).  She will be sadly missed by her many nephews and nieces, Raymond Melkom of Hamilton, Pauline and Donna of Brantford, Harvey Mooradian (Linda) of Oakville, Greg Buzbuzian (Manousch) of Guelph, Jeff Buzbuzian (Amber) of Toronto, Vahon Housepian (Susie) of Lansing, Michigan, Danny Housepian (Kathy) of Ohio, Gary Housepian (Carla) of New Mexico, and Michael Housepian of California; many great-nephews and nieces, Delena Bull (Michael) of Grimsby, Wade Mooradian (Flora) of Colorado, Taryn, Torrey and Drew Mooradian of Oakville, Joseph Mooradian, Joyce O'Neil both of Florida, John and Annie Mooradian of California, David Moore (Nancy) of Michigan, Shrie Riggs of Florida, Laurette Calguire of Michigan, Christian Mooradian of Michigan; and the many great-great-nephews and nieces, Matthew and Nicolas Bull and the many cousins Leo and Gladys Artanian of Detroit and too many others to mention.  Alice was born in Cairo, Egypt.  When she was 3 years old, the family moved to Canada.  She lived most of her life in Hamilton and was married for 62 years to Norman Hachikian.  Alice was a very energetic, positive, and outgoing person.  She was a fabulous cook and baker, she obviously inherited that from her father who was the head chef for the Prime Minister of Egypt where they sat at the head table for many head of state dinners.  We might add her mother spoke 7 languages and her father spoke 6 languages and helped to interpret.  An interesting story we would like to share was when she was married only one year, a busload of 40 people arrived at their home and she had no problem feeding them all.  At the age of 40, Alice and Norm had the great pleasure of meeting and talking for over 20 minutes with Frank Sinatra at the nightclub where he was playing.  They were too late to get tickets for his show; his chauffer overheard her disappointment for not getting to see his show and took them over to meet him.  Alice had many interests throughout her life starting at the age of 16, she was a tremendous painter, she enjoyed entertaining, dancing, designing her and her friends' clothing, picnicking and walking, it was nothing for her to walk 3-5 miles a day.  She was also very active within the Armenian community.  Alice started her sales career with Marvel Jewelers in Hamilton where she worked for over 20 years, and then in later life, at the age of 59 was hired by People's Jewelers in Hamilton.  There, she was hailed as Number 1 salesperson across Canada, for both part-time and full-time employees.  She received many honors, including a dinner in Toronto with her name in lights and being named People's "Diamond Girl".  In closing, as Alice requested, there will be no visitation or celebration of life, as her wishes were to have her 100th Birthday and Goodbye Dinner with everyone at the same time (at Tucker's Market in Burlington), where around 100 people attended.  Alice donated her body to the Trillium Center, for eyes, as her husband also donated his eyes (there were 2 recipients).  The family would like to thank the staff of Kilean Lodge for their dedicated and excellent loving care of Alice.  Many times she spoke very highly of them all.