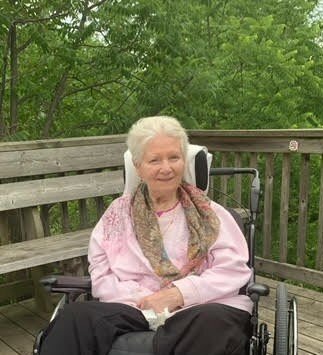 Please share a memory of Esther to include in a keepsake book for family and friends.
View Tribute Book

Passed away peacefully at Albright Manor, on November 5, 2022 at the age of 75. Esther was married to the love of her life Dan for 55 years. Daughter of John and Annie Balint and step father John Radic. She will be forever missed by her children John (Doreen) and Robert (Roberta). Esther will be remembered by her grandchildren Jacob (Jesse) and Kaitlynn. Esther is survived by siblings Richard (Alaire) (and family), Milt (and daughters), and Gary. She was predeceased by her brother Carl. Esther’s family would like to thank the caregivers at Albright Manor for all they have done for her. She was a lifetime member at St. Matthews Lutheran Church, Smithville where she taught Sunday school for many years. She was also a long-time employee of IGA in Smithville. Visitation will be held on Tuesday, November 8th at Merritt Funeral Home, Smithville from 5-8pm. Funeral Service will be held Wednesday, November 9 at 11:00 a.m. at the funeral home. Donations to Albright Manor lift fund would be appreciated and if desired can be made through the funeral home, merritt-fh.com (905)957-7031