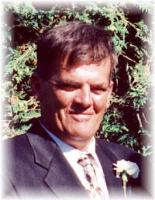 EMBREY, MICHAEL:  Peacefully and after a courageous battle with cancer, at West Lincoln Memorial Hospital in Grimsby on Saturday, February 4, 2006, Michael Gerard Embrey of Lowbanks, in his 62nd year.  Dear son of Myrtle Embrey and the late Samuel Embrey.  Beloved husband for 38 years of Frances (Fran) Ann Embrey.  Loving father of Dianna Embrey, Trish and Rob Geroux, and Chris and Tammy Embrey.  Cherished grandfather of Rebecca, Stephani, Robert, Aaron, Michelle, Thomas, Nicholas and Kiesha-Lynn.  Dear brother of Sam and his wife Donna, Pat, Ann, Rita and her husband Bob, and Bill and his wife Cheryl.  Mike will also be missed by all of his pets.  Predeceased by his grandson Christopher.  The funeral service was held on Tuesday, February 7, 2006 at 1:30 pm at Merritt Funeral Home, Smithville with Rev. Trevor Jones officiating.  Ruth Griffin was the organist.  His daughter Dianna and granddaughter Rebecca both spoke of family memories.  Interment Lane Cemetery, St. Anns.  Pallbearers were Mike's good friends Alex Lampman, Guy Muraca and Jamie Baatnes, brother Sam Embrey, brothers-in-law Wayne Berkley and Ken Robins, and grandson Robert Geroux Jr.  Flower bearers were his grandchildren Rebecca Geroux, and Stephani, Aaron and Nicholas Embrey.  Memorial contributions to the Welland and District Humane Society would be appreciated by the family and can be made through the funeral home.  Special thanks to Nurse Tracy at St. Elizabeth's, and the Staff of Smithville Medical Centre for their care and compassion.  "Thanks for who you were Dad".